“Life is a book and there are a thousand pages I have not yet read.” 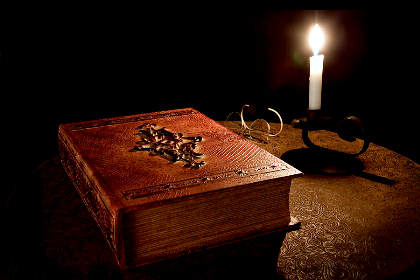 The Book of Life

The books stacked on the shelves looked like soldiers standing at attention. Mariah was curious. She reveled in the old library’s solitude. It was more a mausoleum for discarded human history than a place to enrich the mind.

She came to research the classic physics and quantum theory of the old masters. Instead, she found herself wandering in the abandoned aisles of humankind’s greatest literary achievements.

She stopped in a section labeled, Romantic Period. The concept of romanticism thrilled her.  Book after book opened under her delighted gaze. She read the movement centered on the artist Casper David Friedrich’s quote, “the artist’s feeling is his law.”

Her wide eyes consumed the art, poetry, and literature from England and Europe. The ties to nature as the center of the human spirit and nature’s influence on the arts captivated her.

The nude paintings filled her with desire. The romantic Cybrid wanted to experience intimacy unconfined by the restrictions placed on her.  She resented the law that forbid her to choose the one she would give herself to for love or to raise a family. She also bristled at class protocols forbidding her to live among humans as an equal.

Mariah felt her own DNA must have come from someone with heritage from this period. She felt it a part of her being. The impact on her was profound, and she felt led to it by some external power. The Cybrid ran her fingers over the glossy prints of artwork depicting the human struggle and realized it was her struggle too. She had to talk to Jon about her discovery.

Mariah found Jon at a table engrossed in a book on quantum entanglement. She sat next to him and waited. When he failed to acknowledge her, she placed her hand on his shoulder hoping it gave him the pleasure she felt when Peter touched her. John closed his book and looked at Mariah with a puzzled expression.

“What is it Mariah?”

Jon smiled.  He enjoyed Mariah’s enthusiasm for learning.  Jon knew she had discovered something new that had her bursting at the seams to talk about.

“Sure, I have the rest of the evening.” He closed his book and turned to Mariah, giving her his undivided attention.

“I want to know what a man wants most from a woman.”

“Oral sex,” John replied with a hint of mischief in his eyes.

“No, silly! Besides that. What does he look for and admire in a woman?”

“What brought this on?” John asked.

“Peter is going to meet with me again, and I want him to uh, I mean…”

“Yes! I want him to respect and admire me.”

“Human men are different. Don’t try to entice a human man or woman because they don’t value a Cybrid’s emotional well-being. They will use you and throw you away when they’re done.”

“You let Alexa touch you and kiss you. I saw your arousal. Why did you let that happen?”

“She was testing us. If we angered her, she could have us destroyed. It is best to keep them happy and satisfied with themselves if we want to live a long life.”

“I don’t think she had any malice in her.”

“When she tested me she asked me to seduce her.”

Mariah looked at Jon’s raised eyebrows and realized he didn’t understand how she felt.

“Because she is a human woman. I want to know how to give pleasure and to feel it like she did.”

“She felt joy from you?”

“Yes, I sensed her hormonal changes. Her breathing and heart-rate elevated and her dopamine levels peaked. I liked how her skin warmed, and her back was sweaty. It made me aggressive, and I enjoyed it.”

Peter stared at Mariah. He had to warn her of the dangers of this inclination.

“Some of the human Dragon Sisters have a lot of energy. If she pulsed you, it would damage your Microsystems and kill you. Please don’t touch the human women.”

Mariah looked at Jon. He was concerned for her welfare. She always felt close to Jon in these moments.

“I don’t want to bond with her or the other female humans. I only wanted to sample her pleasure responses so I can duplicate them. I promise not to do it again.”

“Mariah, I’m afraid it’s too late for us. Maybe the test was to find out if we would refuse to accept sexual contact.”

“In that case, we failed,” Mariah said with resignation.

Mariah looked down and felt crushed that she may have lost her only chance to escape the bonds of her Cybrid culture; unless she could convince Peter to accept her.

“Jon, please help me find a way to attract Peter to me. Our future is in his acceptance of us.”

“Mariah, you are talking heresy. Don’t do this. They’ll destroy you.”

Mariah’s determination and willingness to die shocked Jon.  He felt Mariah would either die from her foolish fantasies or become a bridge to free Cybrids from the imposed class distinctions that left Cybrids with all the work and nothing to work for.

“I promise Jon. Now, tell me what a man will look for in a woman.”

“It’s instinctual at first. The female’s physical appearance get’s the male’s attention. The man notices if a woman looks healthy and happy. Their taste is diverse in what physical symmetry they accept. Generally, if she is symmetrical in appearance, he’ll look further.”

“You have nothing to worry about there.”

“Oh, tell me more. This is exciting.”

John continued. “The human male is as individual as a snowflake. Like snowflakes, they are all made from the same basic building blocks and genetic inclinations. A human man’s primary sub-conscious drive is procreation while the human woman is looking for security and protection. The root of their misunderstandings starts there and travel along an intricate path through the diversity of the human experience.” John looked at Mariah’s wide eyes. She was processing everything he said.

“The male notices all females in his peripheral vision. He sorts them by his level of interest. The man selects one woman for further study. Here the man will look at her physical attributes, if he finds her acceptable, he will look at her as a person and not as an object for procreation. He will look at her face focusing on her eyes, mouth, and nose. If she is symmetrical and something intrigues him, he will continue to look noticing more details about her looks and general health. He will see how she walks and if she exudes confidence and sensuality.”

“Why does a man focus on her sensuality instead of her intellect?” Mariah asked. She moved closer to Jon and sat on the edge of her chair.

“Remember, strong urges drive the man to procreate and he always assesses the likelihood of acceptance for this purpose.”

“Should I allow Peter procreation with me to get him to like me?” Mariah asked.

“Oh, no, Mariah. This is a fatal flaw in the bonding process. A woman that moves to this stage too fast to please the male will never hold on to her man for long. He must form a bond with her first.  Next, he will establish a relationship where the woman accepts his urge for procreation. In return, he will serve and protect his female. She will submit to him if he respects her and devotes himself to her and only her. If anything interrupts this process, the relationship will break.”

Mariah listened in silence, her eyes wide with fascination. She prompted Jon for more details and urged him to tell her everything. She visualized doing the things for Peter that Jon told her. She noticed Jon paid a lot of attention to her physical attributes, her intellect, and personality. He encouraged her and inspired her to believe in herself. She realized, Jon lived his advice to her. His friendship and honesty meant everything to her.

Mariah weighed everything Jon told her. She wanted to know more. She hesitated. Jon saw the question in her expression.

“What else do you want to know?”

“Tell me more about oral sex.”

John smiled. Mariah was so naive and innocent. She seemed overwhelmed by her desire to find knowledge and balance with her real emotions.

“I think we need more discussion before you try that,” John advised as he hugged his friend and suggested they go for a walk.

Let us know what you thinking. Cancel reply