I started Buffy the Vampire Slayer a few nights ago. I had seen some episodes as a kid, but was really too young to have started it at the beginning or to understand a lot of what they were talking about. I guess I had initially watched after a few seasons, I remember thinking she was so cool.

Watching it now is probably a much different experience than those who had when it first aired, but I think it’s just the right time for me. The music is great, the sets, the outfits, the hair- all nostalgic for me! And Sarah…. Sarah Michelle Gellar! Beautiful and badass. 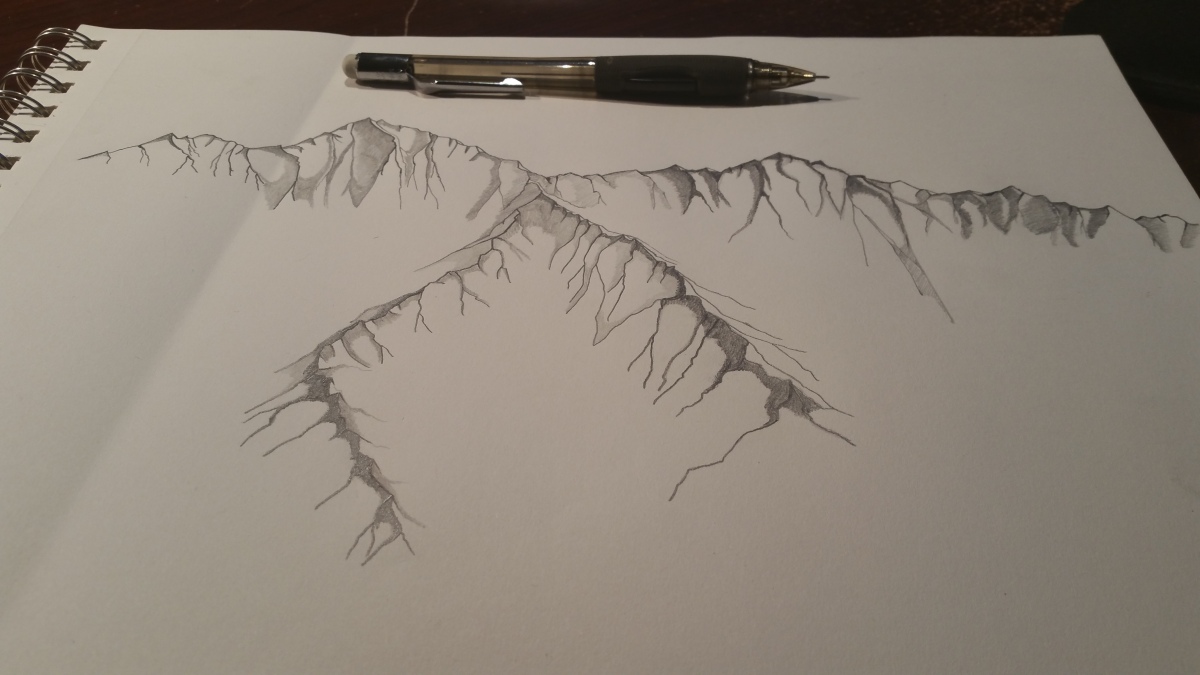 Here is a mountain range I drew for fantasy map practice. You can tell that I was experimenting with different techniques if you look closely at different sections. Still not certain I’ve decided on a certain style or perfected my technique but it’s a start I can certainly build on.

If you’re interested in learning how to draw mountains for a fantasy map, check out Nate’s tutorial(s) here – https://www.youtube.com/watch?v=_FEmwJrwcss

Good luck and have fun!

Below is my nearly finished world map for my short stories. 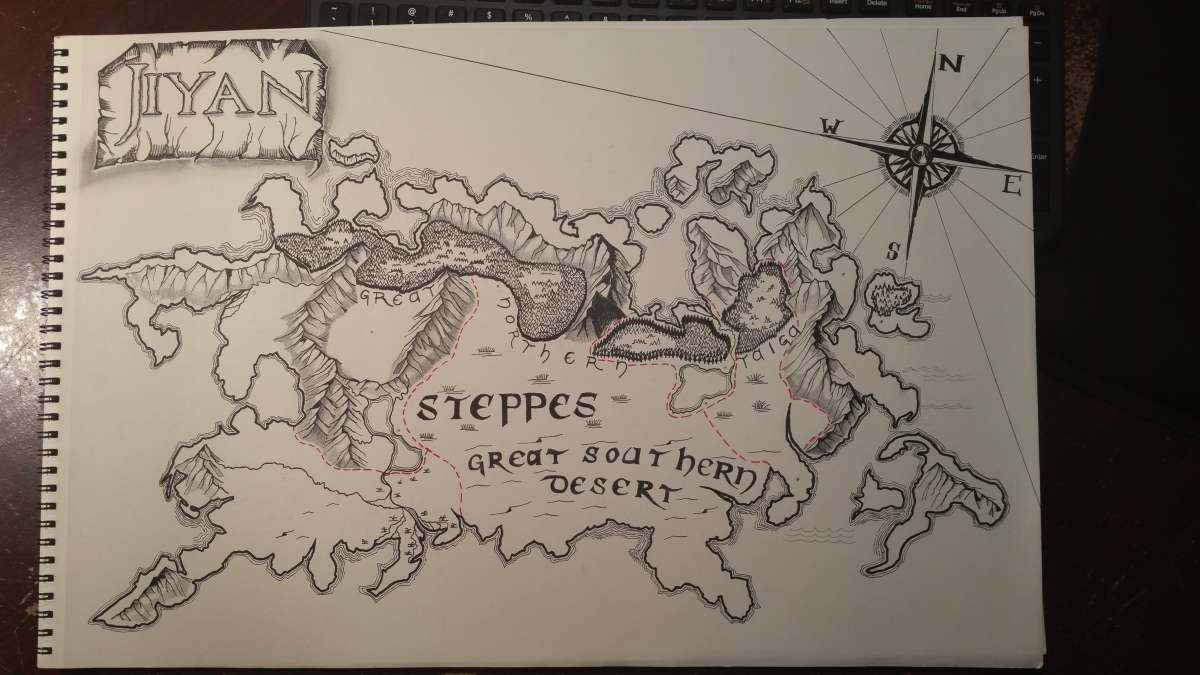 Some time ago I posted about beginning to write short fantasy stories dealing with depression and made a fantasy map of the world I was envisioning. If you’ve been following along, you’ve read about the hero, Catharsis and my regular followers probably know that this is me and his early dealings are based on my suicide attempt.

Here is what the world map of Jiyan (“Life”) has evolved to so far. It’s still a work in progress! 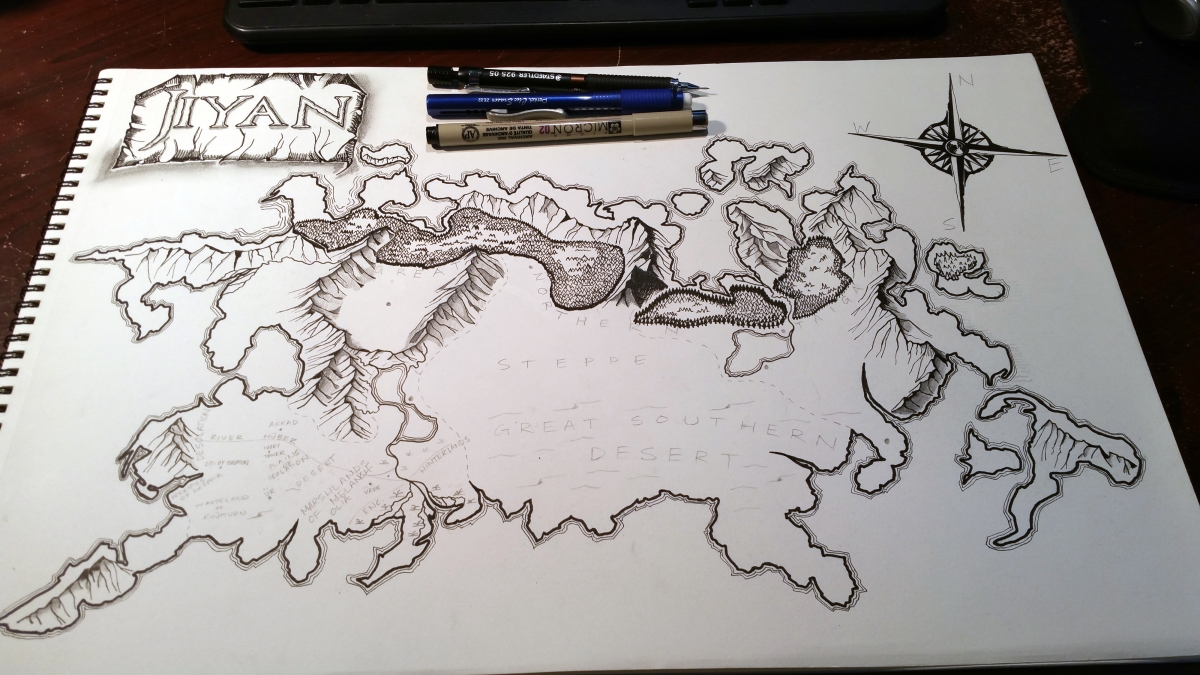 Here is the original map I started with…

And I redrew it here…

This region is located in the southwest corner of the world map at the top (with all the pencil notations), just so you can see how it will all fit in.

I’ve had a hard time coming up with more ideas for the stories, or turning those stories into chapters, and it would REALLY help me to hear comments and suggestions on what I can do to improve them if you go back to read the Short Stories category.

Thank you friends, I’m excited to hear your suggestions!

Before Catharsis passed through his Breaking Point against the Wahrlog of Darkness, there were many days his mind would wander.

One thing he thought about was love.

He wondered…wondered if he was ever capable of it.

He thought he was. Or rather, many paths in his life supported that he was capable of what he thought was an elusive emotion:

Ages ago he had been married. Wasn’t this love?

He had helped bare a daughter into the world. Surely this was an act of love.

He often stopped along the rocky roadside to help strangers whose carts had succumbed to wear. Or those who had been bogged down in the tumultuous weather and storms. This had to be love.

Or when he could, he offered what he had to his neighbors or friends in need. Without doubt, this was love.

It seemed he could go on and on with these proofs and until the settling sun descended over the city wall, and the moon ascended with its blanket of darkness, enshrouding Ǚr and the surrounding countryside. Tucking it in.

He could summon endless proof of love.

But he could find no proof in feeling it. The Darkness muted it.

Often times those three words felt empty. He wanted to feel them. But for some reason he couldn’t feel them.

He could only act them out.

Perhaps that was enough in itself.

Perhaps love was not a feeling.

Perhaps it was a choice.

Many years after the loss of his marriage to the Darkness, he had experienced intimate Relationship with a woman who suffered with Affliction as he did. It was the first time in a long time he held this communal bond with another.

Someone who understood his life with clarity.

It was upon this last thought on which his mind wandered…

Her struggle was not with the same beast as his – this Wahrlog of Darkness.

No, hers was with other beasts; these Wahrlogs of Affliction who exacted their punishments as Rage and Fear.

Yet she, she seemed so oddly capable of love and tenderness. Regardless of the terrors and harpies she battled every night. So inclined to it with all her humanness and personal torments. Greater than Catharsis himself had ever dealt with. So much greater than he was capable of.

It came so naturally to her.

She tended to him and more importantly, understood him. She validated his misgivings and second thoughts.

It seemed over the years that he had lost love. Lost it to the damned Darkness.

Lost it to apathy.

Lost it to lethargy.

Lost it to reclusiveness.

Lost it to the punishment of the relentless Specter – that Wahrlog of Darkness that scratched the walls of his soul with its sinister talons. Torturing him from the dark recesses of his mind.

When he pushed back to fight for what he wanted, It dug its claws deeper through the flesh of his back. Injecting the venom of lethargy and apathy until it dripped into his soul. Sedating him from the surrounding world. Wrapping its free arm around his neck in a stranglehold. Choking off his breath. Choking off his will to pursue what he had wanted.

And then Catharsis would succumb to the Darkness yet again.

Until he made himself alone.

It made Catharsis do things he didn’t want to do. It made him hurt those that were closest to him. It made him callous. It incited him with irate intolerance. Sometimes causing him to lash out in a sleep-deprived state. Venomous forked tongue. That’s what the Darkness did to his soul.

And so it was that at just the time he believed he was beginning to live a normal life. A life consistent with his fellow citizens in the village. It was about that time that it all fell apart.

It was an unfortunate fact of his life.

Sometimes love does not win.

Across the plain of Ǚr, far away from the citadel itself, there stood a shining tower of polished limestone. It was a colossal structure. Towering over the fields below. Dominating the landscape to the horizon, over which the plain’s namesake kingdom lay.

It mirrored the sun’s reflection as a fine gem in the crown of the king. Or a polished plate of glass in the courtyard at midday. It pulsed radiance and even from afar off, emitted a brilliance that was known across the plain.

Its alabaster skin was a testament to its beauty. Each stone finely blended and buffed with the other so that all chinked together like a single dragon’s scale.

It was embedded with many different shades of blue polished gems and minerals that blinked at every angle. Not so much as to overtake the gleaming snowy surface. But merely to accent.

Thick lazulite crystals adorned its horizontal precipices, giving off a faintly cloudy deep green aura, comparable to the ocean’s depths as seen from the gull’s eye overhead. A halo atop the chalk white faces of the tower.

Many knew of its exquisiteness through story or song only, for none in numbers were allowed too close, nevertheless entrance. Only able to cast eyes on it from afar.

Despite all its beauty and grandeur, it became more intimidating in its features, as any outsider drew closer. One would rather call it a citadel than a tower, for it was well fortified and garrisoned many citizens. The same citizens who had built it over the years, enduring the cold winds, stiletto rains, and molten sun.

Though still opulent to the eyes, one could observe battlements and parapets atop the four megalithic walls. Flanking the spire that shot into the sky like a spike into the heavens. Or a compass point by which the rest of the land would calibrate its remaining three directional points.

An arrogant and haughty feat of engineering designed to show all who gazed upon it the bigotry and seclusion of its citizenry.

A pinnacle of privilege.

The meters-thick walls of the gatehouse itself menaced any who approached its entrance. Appearing as a harbinger and to vex outsiders, warding them away from the inhabitants. Visitors were not taken kindly to.

Several less imposing, yet formidable keeps, buttressed the corners of the tower’s walls. Upon closer observation, the finer subtleties of the tower came into view – murder holes, curtain walls, and arrowslits. Accoutrements of defense and to prevent impregnation.

Of the songs sung and tales told of the tower’s beginnings, many knew. They had been passed down through the ages by bards, minstrels, and poets. Alongside firey pits and dusty roads.

Long after the world had been destroyed by Deluge.

And Fire had scorched the forests into plains.

Ages after Wormwood sheared the mountains to the earth.

And Plague had destroyed the animals and Famine had decimated humanity.

Many eons after the earth had been purified and reborn.

Just after man had begun to repopulate the earth.

The tower’s beginnings coincided with The Great Departing. A time of schism marked by a splitting of the earliest members of the new humanity. Though not a splitting in the true sense.

A departure of those from their young familial units.

Those who had a misplaced reality, replaced with a self-righteous bigotry. A skewed, inarguable view of observable facts. A non-acceptance of the world around them. Complete with all its imperfections.

They were the tower’s builders.

They built its four walls. Those gleaning partitions that separated them from the rest of humanity.

And intolerance facing the west.

They insulated and protected themselves from their loved ones. Their soul mates. Their compatriots. Their mentors. And their confidants.

They betrayed them. And they established their new life secluded from any pollution from the outside world.

A holier-than-thou life of solitude.

In their ivory tower.